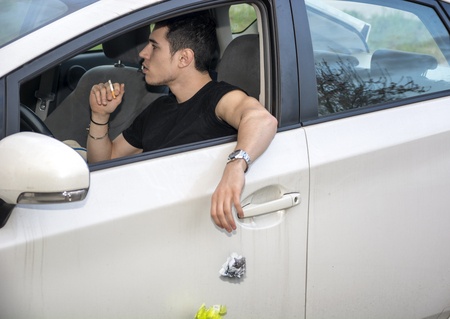 People who throw objects out of the windows of their moving vehicle  eg. cigarette butts, thrash after eating, gum, and even their spit, etc . . .
This is not only against the law and for which you can be fined but it becomes hazardous since there may be other vehicles behind them.  The trash can blow onto the vehicle behind and can block the driver’s vision which can cause accidents. A lit cigarette butt can land in the car behind and can cause a fire especially if it lands on the driver. This can cause an accident as the driver would have to take his eyes off the road to take care of himself or try to pull out of traffic to do so sometimes unsuccessfully.
I can personally talk about a  summer a few years ago when I had my window down as it was quite hot. The driver ahead of me decided to lower his window and spit out of the window. Well, with the speed he was going on the highway, the spit promptly landed on me in my car. I was able fortunately to be able to pull aside safely and clean myself off with tissues and a hand sanitizer which I had in my handbag. I was angry and disgusted and felt like throwing up. It was really gross and nasty !  I could not wait to get home to take a shower.!
Then there are people who do not know where they are going before they get on the highway . They think they know where they are going before they leave their home, so instead of planning their route before they get into their car, they try to do so while they are driving when they realize that they do not really know. They are not sure which exits or ramps to take in order to get off the highway and are constantly changing lanes to get off exits for which they are not in the right lanes . Sometimes they discover at the last moment that the exit which they thought they needed was not really the case and they try to swerve back onto the highway. This is such a very dangerous thing to do as it can cause serious accidents involving injuries and possible deaths.
Please be prepared and know exactly where you are going and the route you will be taking before you leave home.