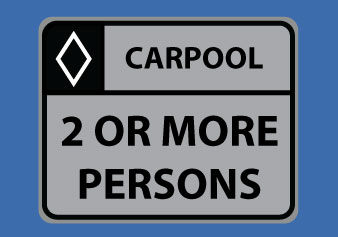 There are many people who use the HOV lanes incorrectly. Although they  know the requirement in order to use these lanes, they take the chance on using them and risk being caught and charged. There are some of those who are using them incorrectly who will weave in and out of these lanes whenever they think that they see a police car. This can be so dangerous as they suddenly will cut in front an unsuspecting  motorist without  any indication or warning , thereby risking a potential accident and injuries or death not only to themselves but to the other unsuspecting motorists and their passengers if any. If you use the highway, you see this every single day. People, if you are in a hurry, then leave your home a little earlier to ensure that you get to where you are going safely. It is not worth risking your life and that of unsuspecting people who are going about their travels in a proper way.

Here are the requirements for using HOV lanes :

You can use an HOV lane if you have at least two people (including the driver) in one of these vehicles :

If you are towing a trailer, you can still use the HOV lane if the combined vehicle-trailer length is less than 6.5 meters.

The following vehicles have unrestricted access to HOV lanes, no matter how many passengers they are carrying :

The penalty for improper HOV lane use is a fine of $110 and 3 demerit points.
Also, there are many people who are elderly and still drive and who despite the speed limits posted on the highways refuse to go with the limits allowed. For example, they will remain at 40 km even though it is 70 km. They also do not seem to care what lane they are in, whether it is the fast lane or not.  I know that they have a valid licence and I have no problem with elderly people driving , since I am elderly myself, but if they do not want to speed up, then they should stay off the highways and keep to the regular roads . The reason being that some drivers following them on the highway become very irritable and their subsequent actions can intimidate them and cause accidents and injuries not only to them but to other innocent drivers on the highways. It must be noted however that in no way does this apply to all elderly drivers but rather only to quite a few of them.