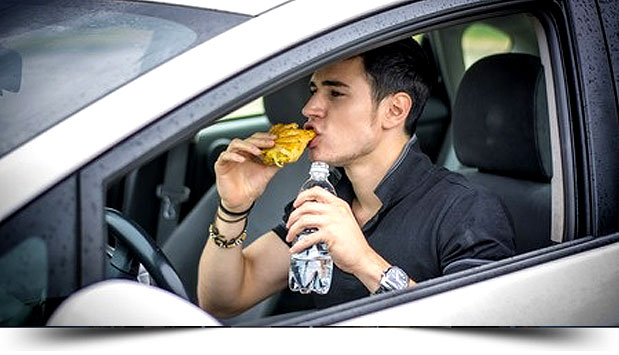 People who eat and drink while driving. This is  a very dangerous and unsafe practice  as both hands are not on the wheel of the car and full focus is not on the road as required. Spillage can cause the driver to swerve which can cause accidents especially if the liquid is hot. Accidents caused are not only to themselves but to other vehicles including their passengers. As well, it is also against the law to do so and therefore you can be charged if you get caught which also has repercussions with your insurance.

People driving vehicles who see that you are reversing out of your parking spot when leaving but speed up to get ahead and pass you. This results in numerous foolish , reckless and unnecessary accidents  especially when the speeding  vehicle was  not originally in the vision of the vehicle driver who was attempting to reverse. Please be considerate. You would not like someone to do that to you. No accident is worth it especially when it can result in significant injuries.

People who tailgate. The first question I would ask is why. Why adopt this dangerous and unsafe habit. It does not get you to where you are going any faster. In fact, it causes accidents which can cause you to be delayed.  There can also be very serious injuries which can result in permanent disability or even death. If you hit someone from behind, you are automatically assumed to be guilty even though the person ahead of you had stopped suddenly. You can be charged with one of two charges. The first is a charge of following too closely which can result in a loss of four points. The second is a charge of careless driving which can result in a loss of six points. Needless to say , this can result in your insurance rates either doubling or tripling in some instances. If you are a G1 or G2 driver, you can lose your licence for a minimum of thirty days or longer due to escalating sanctions as you are still a novice driver. You will also be considered a high risk in insurance coverage , thereby causing you to pay huge insurance rates and is not dependent on the outcome of the court decision . In the eyes of the insurance company, you are guilty since you hit from behind.